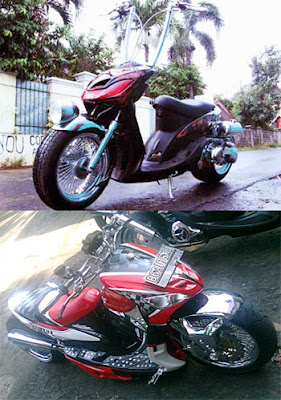 Lots of creative people on some parts of Asia particularly in Indonesia, are modifying their Yamaha Mio to look like a chopper bike.

While the term “chopper” is generally used to describe a motorcycle or bicycle that has had some of its original parts replaced with custom parts, today’s definition has grown to include custom motorcycles and bicycles that are low to the ground, usually with extended forks creating a long front end. – From Wikipedia

I haven’t got any idea it can be done until I saw the above pics at some Indonesian websites. Cool ei!

Actually I got the chance to personally visit a Mio Modification contest early this year at the Yamaha Fiesta and was also amazed by all the entries made by my fellow Filipinos specially those that installed large speakers and plasma tvs on their unit. Others have different concept and designs, from paint customization, racing replica’s to awesome futuristic touch. Way to go Mio zealots!