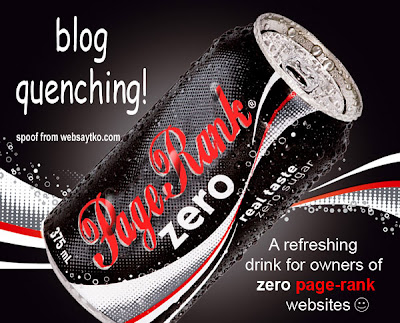 My site was one of those affected by the Google tsunami that swept a lot of websites page rank last December 2007. I was uber mad about it. Imagine that instant my site went from PR4 to PR0 after the wave! Not even a gradual reduction like some other blogs have experienced. Wattah! At first I become uneasy, but since I’m not the only one affected with the wrath of Googel, I said to myself “blog goes on, with or without pagerank“. And since my site was down for almost the whole month of December, I can now see the dropped of my stats from Alexa and Technorati.(i know they rank our sites 3 to 6 months backward). Whew! Great statistics to start the year. lol!  Despite what happened I still continue to post juicy (fruit lol) articles to my blog to compensate everything.

Then Gooogle surprised me last March 15 by giving me back my PR. Although its only half of it, well whattaheck it’s much better than zero hahaha! By the way during the time I was mad at Big “G” I bought this domain http://googlepageranksucks.com, by the way its still for sale just in case someone (whose mad at G) out there wants to buy it! hehehe.

For the meantime just relax and cool yourselves with the refreshing drink of Page-Rank Zero or the Real Thing!

4 thoughts on “got my pagerank back”