Im having second thought of doing the run myself, but after seeing Gel, I guess I might give it a try next year haha! I salute you sir Gel! 😀 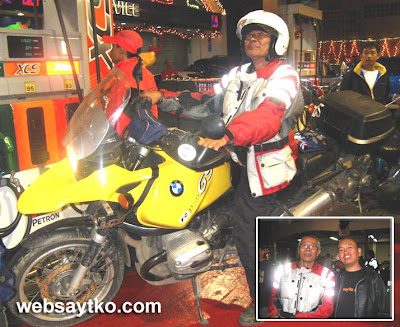 The man I’ve met that night on board a yellow BMW RS1150 served as an inspiration and invitation to everyone to go into riding. His feat was truly remarkable. I was referring to Mr. Evangel Mercado or Gel to his friends. Looking very fit at the age of 62, he just crossed the finish line at Petron Kisad, Baguio city for the AMDG-Petron Endurance & Economy Run.

Coming from  Petron C5 – The route that starts in Manila and ends in Baguio City via Nueva Vizcaya, Cagayan, Ilocos, and La Union Province, approximately 1000kms overall. Riding extensively for almost 24 hours, battling fatigue, drowsiness and cold wind. Mr.Mercado actually won First Place in his class of 1000cc and up.

Gel gladly make himself available for some photo session and chit-chat. I asked him if he drinks energy drink along the way to make him awake, alert or somehow replenished his energy. To which he replied “It’s a no-no for me. Mineral water is enough”. Take note of this. He told us secrets about bringing in some “kalamansi” for this stuff truly helps.

I feel great being a rider and being able to meet guys like Gel. Riding out of town and exposing oneself to nature has definitely been gaining of a lot of enthusiasm from riders lately.

Im having second thought of doing the run myself, but after seeing Gel, I guess I might give it a try next year haha!  I salute you sir Gel! 😀