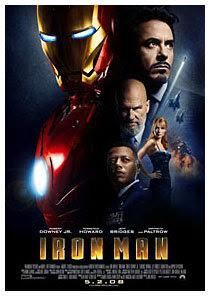 Yes! I was able to watch Iron Man – 2008 movie yesterday, I remember the last time I’ve watched was Spiderman 3. Well after more than two hours watching it (that long) I could say it was one movie I could never forget. First the casting was great. Iron Man portrayed by Robert Downey Jr. is splendid,  Gwyneth Paltrow  as his personal assistant looks very natural and the con man Jeff Bridges was perfect for the role (specially with his bald look).

Even my kid Sean Kirk (who’s only four year old) enjoys the movie a lot. The movie has a lot to offer. All the high-tech scenes was an eye candy to all the tech savvy people, (I like the part that robots were assisting Robert in wearing his Iron Man suite, and the part that he shoots the tank and walk away, nice explosion!) it has a lot of funny scenes too (specially with the robots), some drama, suspense and of course a lot of action.

Not to mention the moral lesson you’ll get from the story. Its admitting your mistakes and correcting it even if you have to sacrifice a big portion of your life. (in this case his multi-million business) Although Tony Stark is not the humble type of superhero, (because he admits he is Iron Man) I like the way he delivers it. Its justifiably natural for a changed man to be proud to what he is right now. Isn’t it Mr. Downey?

Kudos to Marvel Comics and Paramount Picture
Director Jon Favreau – for making such an entertaining movie like Iron Man. A sequel is very much welcome.