The weather is gloomy outside when we (PnSers Camera Club) decided to move to Riverbank for our main event, the Christmas party! We were just like in an Amazing Race situation as leave Pan de Amerikana in three groups. Three on motorbikes (including me), one group on an SUV and the last group commutes 😀 The sad part was I got lost and arrived 15 minutes later from where they are wahhh! Since the sun still shines that time, the group still manages to do a photowalk around the area, but unfortunately they were warned by the assign guard not to take photos around, instead of halting on shooting, the group turned themselves to shooting dews on the grass to the amazement of the people around and mostly to manong guard haha! Then nightfall, we picked the nearest bar to be our xmas party venue, its Bonfire Bar & Grill. After we positioned ourselves at the table then came out all the tripods, its shooting time again for the indians! (walang kapaguran hehe) I can’t blame them coz the night scene fronting us was very inviting to practice night scene. Another indian arrive at the scene. Its chuswa, just in time before we chow. After a short prayer led by a knightneo we ate a sumptuous dinner, around 5 different dishes, everyone was full! I then made a short speech thanking all the attendees and sponsors to the very first Christmas party of PnSers Camera Club (PCC), then one of the highlights of the night – its raffle time! A number of members have pledge some prizes, I think almost everyone got a prize, excluding me and vice althea. 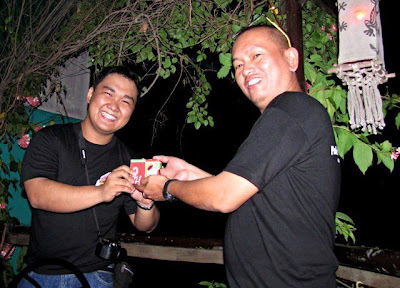 Everybody was waiting for the grand prize (a camera) which I’ve pledged. Ace_creativemind was the lucky winner to be drawn, and he was happy with it (the camera), I hope so haha!

We then dozed off a few too many San Mig Lights while we introduce ourselves one by one. Everybody had a story to tell on how they became hook with photography and everything else in between. Its almost midnight when the indians decided to call it a night and go back to their each own teepee. 😀