This is indeed an experience for the iron butts…

We have proven something that a lot of people were so skeptical about and said was not even humanly possible on small displacement bikes and scooters. 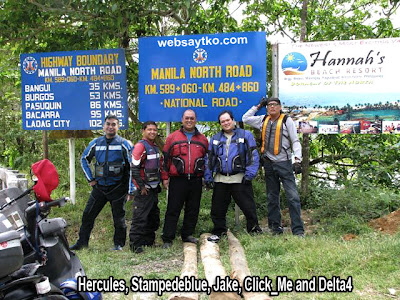 Just last week, at around midnight. As we’re all in the coziness of our bed and sleeping tight. Five gallant riders were out on the streets galloping into the night. As they all decided to do what others might think as undoable or insane. And that is riding all the way the Northern Loop in 24 hours!

It means riding and covering a number of provinces, starting from Bulacan and all the way to Ilocos Norte, then going back to Pampanga! Which is more than a thousand “butt torturing” kilometers!

Never ending highways, dizzying twisties, eerie darkness, and crater-like roads are some of their faithful companions all throughout their journey. Im sure a thanksgiving dinner is all their wish for after this ardous adventure.

This is indeed an experience for the iron butts…

We have proven something that a lot of people were so skeptical about and said was not even humanly possible on small displacement bikes and scooters.

Their Story: As narrated by Click_Me

This was one of the most exciting days of my riding career. I just woke up at around 9:15 PM and was rushing to get ready to head out to meet the people who will be riding with me around the northern part of Luzon. I was stumbling all over as I try to carry all my stuff to the bike. A few minutes after I have attached my bag and loaded my stuff, I went back inside to take a bath. After a long cold shower to wake me up, I got dressed and got my helmet. I looked up in the sky right before I mounted my bike and told myself, “this is a fine night to go out and ride”.

I was soon on my way to Quezon city from Marikina where I live. On the way, I was trying to shake down the bike to make sure that the components are all working properly. Switched from my regular lights to the HID I had installed a few weeks earlier in preparation for the night ride. Also tried to get used to the new tires which I had installed only a day before. All I can say is, I was never this excited and scared at the same time for this will be the longest 24 hour ride of my life.

Upon reaching Timog, I immediately scanned the area for a Shell station as I was used to loading V-Power on my bike. Upon reaching shell, I got the chance to finally meet one of the people joining us. Tito and his newly purchased 2nd hand Hayate pulled over to load up also. I introduced myself and told him that I was going on the ride. After a few minutes, we soon headed over to Station 2 where everybody was going to start from.

Upon reaching Station 2, we talked about a little strategy and about our expectations on the ride. Tito was afraid that his tires which were still stock, might not make it all the way. I told him that at least he had rims on instead of mags which ripped through my stock interiors on the Nouvo. Hence the reason why I decided to use tubeless tires for the ride. After a few minutes, Jake, our ride organizer arrived on his Barako. The tricycle bike never looked so good in my eyes. It was all shiny and gleaming as if it just came out of the detailing shop.

As Jake explained the route to us, we were handed our log sheets that we are to fill in during the duration of our ride. Mileage, gas loaded, time and location. This would give us an understanding as to when we needed to stop based on the maximum distance each bike can carry on a full tank. While planning the ride, Noyr on his beautiful CBR150 arrived to lend me his hand pump which I borrowed a day before the ride. We tried to convince him to join but he just came from work and was pretty tired.

A few minutes after, Hercules and Stampedeblue arrived. Herc even had the time to say hi to the girls inside the bar. Some things just never change. LOL! 15 minutes before the scheduled take off, we had one of the waiters of the bar take a photo of the group with Jake holding the map.

We geared up and mounted our bikes. At exactly 12MN, we rolled off into the night. Taking Edsa all the way to Monumento. Upon reaching Balintawak, the rain started to fall. I said to my self, “what a way to start things off… Oh well, this might just be a blessing from above”. True enough, as we turned right at Monumento, the rain stopped and we were frantically racing towards Bulacan.

The initial ride was already tough. Knowing the treacherous state of McArthur highway especially during the night. I almost crashed myself in one of the potholes I passed through. It was a wakeup call for all of us that this was no ordinary ride. We were already pushing the bikes on the very first part of the ride. I was constantly on full throttle. As we safely passed through the Sta. Rita exchange, the route became a little easier with less vehicles since it was already past midnight. We went through Bulacan at a very fast pace. I was running between 90 and 110Kph at times where I got the leverage to push it. However, upon crossing San Miguel Bulacan, we suddenly came across what was a 5Km traffic jam due to road repairs. We tried our best to go through the traffic but the time lost was evident since the road and the shoulders were jampacked. As soon as we got through the traffic and the shoulder off road excursion, we were hit by our very first incident.

Due to bandwidth issues, i will post the whole story in three parts.  Please bear with it. 😀