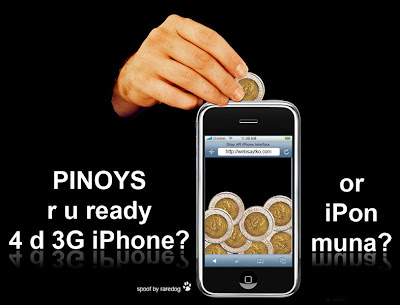 The much-awaited iPhone by Apple will finally be in the hands of the elite Pinoys. Why only the elite you might ask? Well its because starting August 22 Globe will (exclusively) start to sell it here in the Philippines to a whopping price of P41,899 for the Prepaid 8gb model and P48,899 for their 16gb model. Contrary to what Steve Jobs (CEO of Apple) announced on the iPhone 3G debut that “the price is a maximum of $199 all around the world” With the current exchange rate of $1 – P44 Duh! that would be P8,756 only! See the big difference! 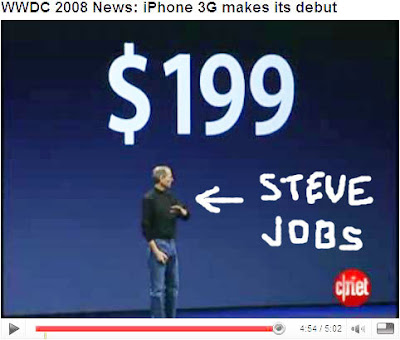 But of course Steve was just referring to the price of the unit. A lot of us forget that a subscription plan is tied-up with the unit. so let’s say I’m in the US and grabbed one 8gb iPhone for $199. I got this computation.

Because if I choose to buy it straight (Prepaid) at a price of P41,899, (iPhone 8GB which includes P200 free load for 5 months and 50 hours of free internet) I would say its still way too high for a mobile phone unit. “sana kung yung 3G means 3 Gives hahaha!” I would rather buy myself a decent laptop and find a way to insert my simcard there, or else instead of an iPhone I’ll make iPon muna my money,lol! By the way, Is it true that the progesterone in our brain can be affected by using mobile phones for a long period of time? Anyway, that’s another story.