2) The early bird might get the worm, but the second mouse gets the cheese.

3) Children: You spend the first two years of their life teaching them how to walk and talk. The next sixteen? Spent telling them to sit down and shut up.

4) He who smiles in a crisis has found someone to blame.

5) My mother never realized the irony in calling me a son-of-a-bitch.

6) Politicians and diapers have one thing in common. They should both be changed regularly, and for the same reason.

7) I thought I wanted a career, turns out I just wanted paychecks.

10) To steal ideas from one person is plagiarism. To steal from many is research.

11) I asked God for a bike, but I know God doesn’t work that way. So I stole a bike and asked for forgiveness.

12) Light travels faster than sound. This is why some people appear bright until you hear them speak.

13) We live in a society where pizza gets to your house faster than the police.

my desk, I have a work station.

15) I should’ve known it wasn’t going to work out between my ex-wife and me. After all, I’m a Libra and she’s a bitch.

16) How is it that one careless match can start a forest fire, but it takes a whole box to start a campfire?

17) I didn’t fight my way to the top of the food chain to be a vegetarian.

18) A computer once beat me at chess, but it was no match for me at kick boxing.

19) I saw a woman wearing a sweat shirt with “Guess” on it…so I said “Implants?”

20) The shinbone is a device for finding furniture in a dark room.

21) Good girls are bad girls that never get caught.

22) Laugh at your problems, everybody else does.

24) The main reason Santa is so jolly is because he knows where all the bad girls live.

25) Did you know that dolphins are so smart that within a few weeks of captivity, they can train people to stand on the very edge of the pool and throw them fish?

26) God must love stupid people. He made SO many.

29) Women will never be equal to men until they can walk down the street with a bald head and a beer gut, and still think they are sexy.

30) Always borrow money from a pessimist. He won’t expect it back.

32) Never hit a man with glasses. Hit him with a baseball bat.

33) We have enough gun control. What we need is idiot control.

34) A diplomat is someone who can tell you to go to hell in such a way that you will look forward to the trip.

35) Money can’t buy happiness, but it sure makes misery easier to live with.

37) I discovered I scream the same way whether I’m about to be devoured by a great white shark or if a piece of seaweed touches my foot.

38) I don’t trust anything that bleeds for five days and doesn’t die.

39) War does not determine who is right. It determines who is left.

Just before he died, he said to his wife, “When I die, I want you to take all my money and put it in the casket with me. I want to take my money to the after life with me.”

And so he got his wife to promise him with all of her heart that when he died, she would put all of the money in the casket with him. Well, he died. He was stretched out in the casket, his wife was sitting there in black, and her friend was sitting next to her. When they finished the ceremony, just before the undertakers got ready to close the casket, the wife said, “Wait just a minute!” She had a box with her, she came over with the box and put it in the casket.

Then the undertakers locked the casket down, and they rolled it away.

So her friend said, “Girl, I know you weren’t fool enough to put all that money in there with your husband.”

The loyal wife replied, “Listen, I’m a Christian I can’t go back on my word. I promised him that I was going to put that money in that casket with him.”

“You mean to tell me you put that money in the casket with him!!?”

“I sure did,” said the wife. “I got it all together, put it into my account and wrote him a check. If he can cash it, he can spend it.”

A man who just died is delivered to the mortuary wearing an expensive, expertly tailored black suit. The mortician asks the
deceased’s wife how she would like the body dressed. He points out that the man does look good in the black suit he is already wearing.

The widow, however, says that she always thought her husband looked his best in blue, and that she wants him in a blue suit.

She gives the mortician a blank check and says, “I don’t care what it costs, but please have my husband in a blue suit for the viewing”.

The woman returns the next day for the wake. To her delight, she finds her husband dressed in a gorgeous blue suit with a subtle chalk stripe; the suit fits him perfectly. She says to the mortician, “Whatever this cost, I’m very satisfied. You did an excellent job and I’m very grateful. How much did you spend” ?

To her astonishment, the mortician presents her with the blank check. “There’s no charge” he says. “No really, I must compensate you for the cost of that exquisite blue suit” she says. “Honestly, ma’am”, the mortician says, “it cost nothing. You see, a deceased gentleman of about your husband’s size was brought in shortly after you left yesterday, and he was wearing an attractive blue suit. I asked his wife if she minded him going to his grave wearing a black suit instead, and she said it made no difference as long as he looked nice…

… So I just switched heads.”

A man goes to Spain and attends a bullfight. Afterwards he goes to a nearby restaurant and orders the specialty of the day.

The third day he does the same and the fourth, but on the fifth day he goes to the restaurant and orders the specialty of the day, and they bring him two very small balls on a big plate. The man asks, “What gives?”

And the waiter says, “Senor, the bullfighter doesn’t always win!”

There was an older man who’d married a younger woman. All was going well… except in the bedroom. He couldn’t last long enough to satisfy her. She said it didn’t matter but he knew it was getting her down. So he went to the doctor and asked for help.

The doctor recommended that he satisfy himself before they have sex — that way, he’d last longer. The next day, the man planned on ravishing his wife when he came home, and decided to please himself on the way. So he pulled over onto a quiet road. But he couldn’t just sit there in his car having a wank, so he decided to lie under the car and pretend that he was fixing he car. He crawled under the car, closed his eyes, imagined his wife naked, and started wanking. After a while he felt something tugging at his jeans.

“Sir, this is the police. Would you mind telling us what you’re doing?”
Not wanting to lose this wonderful image of his wife he kept his eyes closed.

“I’m just fixing the axle of my car, officer.”

“Well, while you’re down there you’d better check the brakes. Your car has crashed into a tree half a mile down the road!”

A busload of politicians was driving down a country road, when suddenly the bus ran off the road and crashed into an old farmer’s barn.

The old farmer told him he had buried them.

The sheriff asked the old farmer, “Lordy, they were ALL dead?”

The old farmer said, “Well, some of them said they weren’t, but you know how crooked politicians lie.”

What is the meaning of courage?

Is it to fight a bull in a bullfight?

Is it to go alone inside a haunted house?

Is it to go into war with  bare hands?

Is it to practice free fall parachuting?

Is it to gamble your salary on a coin toss?

Is it to insult the bouncer in a bar?

Is it to humiliate your boss?

Is it to go on a defective ferris wheel? 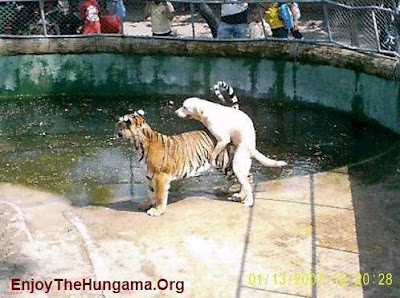