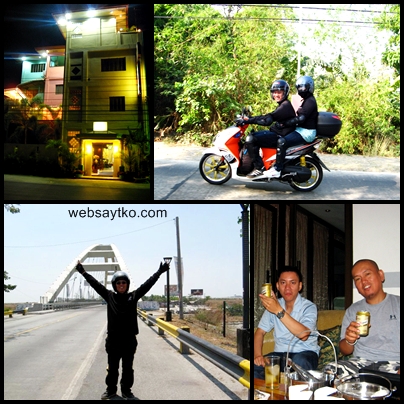 Once we set our bikes at the parking area, we took turns on going inside the church to pray and meditate. Its because we brought lots of things kaya hindi pedeng iwan, kaya pinauna ko na yung mag-partner. After 15 minutes they were back. Its my turn naman. I lit up 3 candles at the candle areas, line-up in the confession, and took some photos before I leave. (all in all I spend almost an hour din cguro hehe)

Wow Hotel! Yessss! I hopped on my Mio and rode for about 5 minutes before I reached Star of David Hotel. Its a modern design 4 story Hotel near the church. Not that big, but its the coziest place around (i think so) and besides, they got WiFi hehe.

Our night time were not so jubilant, after dinner at Mang Inasal, we bought eight beer-in-cans at 7-11 and sneaked it inside the hotel. The problem is Sergs was not feeling well, after gulping half of his first beer-in-can, he got an upset stomach. The second problem was that
he goes inside their room and bade me goodnight! Bottomline, I got all the beers and the pulutans (Sisig na Bangus and pistachio nuts) all in my room. (Im solo in my room, haven’t I told you that?!).

What else to do? (the tv has no cable channels, kamusta naman yun!) So no choice, but to drink and surf the net. I’m just lucky I got a decent signal since my room was at the 2nd floor, and the wi-fi router were located at the looby of the hotel. Cguro, I’ve finished 5 in cans before calling it a night hehe.

The next day, we were discussing if we’ll take the loop instead of the the usual route we take. (The loop – via Lingayen, Dagupan, Zambales, Olangapao road) Its not in the original plan, so pinili na lang namin yung dating dinaanan namin (Urdaneta, Tarlac, Apalit, Bulacan road) kase iniisip namin baka maligaw kami or hindi namin kayanin sa sobrang layo at init ng panahon. Its about 9am na rin kase when we take-off at Manaoag.

On our way home, the ride was a bit faster now. I can’t believe it, but Sergs says the highest speed we made during some stretch was 115kph. OMG!

We’ve reached Monumento at around 2pm. I thank God we all got home safety from our ride. All I can say, its a GOOD RIDE and a GOOD FRIDAY after all.